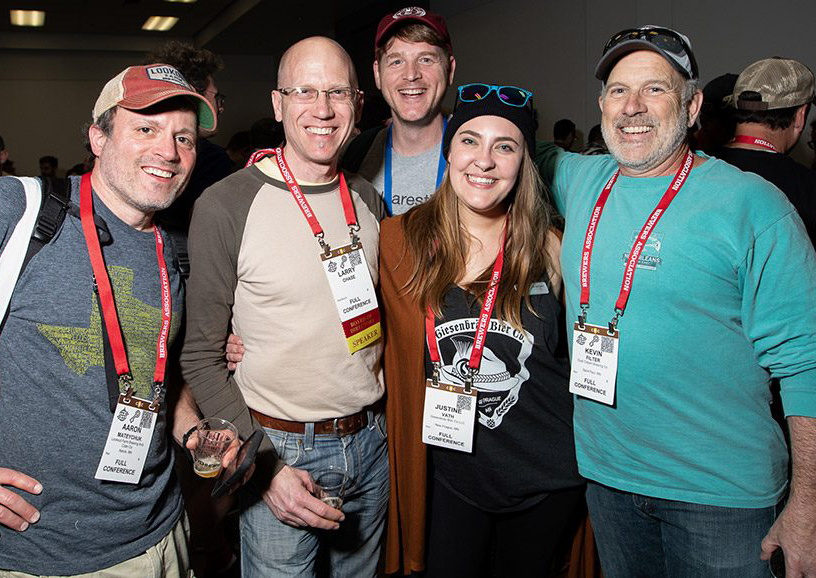 Larry Chase is an award-winning brewer living in Southern Oregon. He is a sought-after speaker, Brewers Association Board Member, and writer. His most recent article is “Rock Star Brewers: Adding Value Beyond the Brewhouse,” The New Brewer, September/October 2019 and he presented on that topic at 2019’s Craft Brewers Conference in Denver. We think Larry is a Rock Star Brewer!

It’s super-energizing to talk with someone as passionate about brewing and the beer industry as Larry Chase. And it’s surprising to learn that this “higher calling,” as Larry says with a wink, began when he attended Luther Seminary! “You may not know that Lutherans have been enjoying beer as far back as Martin Luther, whose wife was a brewster,” he says. A bit of research led me to an NPR story where I learned that “the protest Luther launched 500 years ago revamped not only how Europe worshipped but also how it drank. He and his followers promoted hops in beer as an act of rebellion against the Catholic Church.”

Larry tells me that often during the weekly Wednesday theology discussions with classmates at the local pub, he couldn’t stop wondering, “How do they create all these flavors with the same basic ingredients?” This curiosity began when Larry was earning a college degree in biology with a chemistry minor, prior to Seminary.

After Seminary, Larry embarked on a trip to Europe where he relished the experience of the English pubs and happenstance placed him in Germany for Oktoberfest—1-liter beer steins and all!

Back in the US, the dreaded post-college question arose: “So Larry, what are you going to do?” His answer: “Brew beer.”

Larry planned to begin his quest by conducting informational interviews with brewers and others in the industry. He quickly received a job offer and learned on the job, read voraciously, and realized that there was much more he wanted to learn about brewing. At that time, there were few options and he chose one of the very first “online” courses—which came on a series of VHS tapes—from the highly respected American Brewers Guild.

From there, as they say, the rest is history. In 10 years, he progressed from assistant brewer at a 10-barrel brewpub to head brewer facilitating the opening and start-up of a 25-barrel brewery and growing it to 16,000 barrels per year. Along the way, Larry has been fortunate to learn all aspects of the industry. In a nutshell, Larry is a brewer with 22 years of expertise in brewhouse fermentation, cellar operations, and wort shipping. He has experience with beer marketing and promotion, brewery employee training and support, and perhaps his favorite—beer education for customers and restaurant staff where he’s always worked in restaurants with on-site breweries.

There’s a lot that Larry loves about the industry, including the people. He also loves that brewing is a mixture of science and art. “You follow the science principles, and you trust the art,” he says. “You learn with each new recipe you develop.”

For someone considering the beer industry as a career, Larry strongly advises conducting informational interviews (in addition to other research). “There are so many different realms in the industry—from brewing beer to engineering to QA/QC and lab work. Also, from what I’ve learned, less than 25 percent of most hires happen from a simple job application. It’s all about connections,” Larry stresses. “And conversations lead to connections.”

You might wonder if Larry has a go-to beverage when the day is done. “I’m a cross-drinker,” Larry admits with a smile. “In the summer, it’s a G&T. I love a dirty martini, bourbon, and wine. Most importantly, my choice depends on the environment, the people I’m with and the season. With beer, I look for flavor balance, low to mid alcohol and for it to be interesting.”

Learn more about educational opportunities in the Beer Programs section of this website.