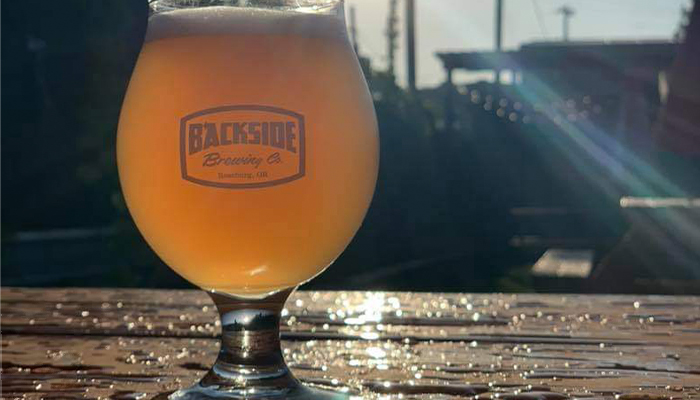 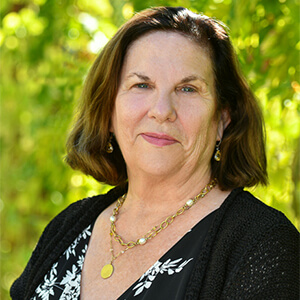 Nancy Rodriguez is a chef and freelance writer. Originally from California, she graduated from culinary school in Portland and pursued a career in the wine industry. Having worked with wineries throughout the Willamette Valley and most recently in the Umpqua Valley region, now you will find her at the Rose Hill Bed & Breakfast in Lorane, Oregon, creating a culinary and wine experience for those who are traveling on the wine trail.

In 2012 the Backside Brewing Company opened its first location—in Roseburg, Oregon. The owners, K.C. and Savannah McKillip, successfully transported their passion for brewing beer from a barn in rural, western Oregon to an urban setting. Now, in bringing the Backside Brewing Company to nearby Sutherlin, a second location, pieces from the past have been put together with a plan for the future.

K.C. McKillip began home brewing beer as a hobby in the back of his parent’s barn. He was instantly intrigued by “a science that can be consumed.” In this unlikely location was born a passion for the brewing of beer and the beginning of the Backside Brewing Company. He grew up in tiny Tenmile, Oregon, located outside of Roseburg in the Umpqua Valley. After becoming acquainted with the local wineries of the region, he based his business model on their concept with a focus on agriculture and an original vision of keeping it small. As production began to expand with the increase of experience and a refining of brewing skills, the scope of the business began to grow as well. In the decision to do it on his own, K.C. did ignore the advice to not rush in, but he did this with a calculated risk. He does acknowledge that evolution came from failure. Initially, a naiveté about the business and what it would take to be financially successful was overshadowed by the reality of it being a tough industry. The competition in craft brewing has raised the bar high for quality. He describes the Northwest as “beer snob central” and first impressions are everything. Two important lessons learned were: it is cheaper to dump a product that is not of good quality than to serve it and don’t try to distribute before you are ready. Distribution should grow organically with the brewing of the beer. The Backside Brewing Company was funded by the sale of one of his other companies. This allowed for the purchase of a building in Roseburg and with it, new equipment that took the beer to a new level.

The interior of Backside Brewing belies its location in a quiet neighborhood and the feeling of a barn. It is a cavernous space with high ceilings, wooden beams and a warm glow from lights hung in glass jars, flickering like fireflies. Near the long, gleaming bar is the wood-fired pizza oven, built by K.C. and his uncle. The intention was to create a place with a welcoming atmosphere and the sign leading to the brewery states “If you tap it, they will come.” On tap are what K.C. calls genuine, Northwest style ales, IPA, stout and porter. His beer brewing philosophy is to learn the basics well, make sure you can replicate your recipes and do not compromise on quality. He is also uncompromising in the credit he gives to his wife, Savannah, who is integral to the success of their business. To his brewery crew, past and present, he gives much credit for their dedication. 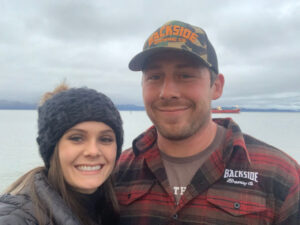 In the same way that attention to detail and careful selection of ingredients results in a beautiful brew, they have given the same to create a second brewpub in Sutherlin, Oregon. Rather than any delay being a hindrance, it has allowed them to think through the process and move forward with intention. The remodel of this historic structure began by stripping away the old layers of paint that hid the beauty of a building constructed on a strong foundation of wood, metal and brick. These are lasting materials, hone from the past, that will breathe new life into this long standing building. The exposed brick and the repurposed barn wood used in the design of the interior speaks to the welcoming warmth that envelopes the patrons. The menu is designed to be authentic pub food built on the reputation that Backside Brewing has already established for its well-crafted beer. The goal is to create it in the spirit of an old fashioned Irish Pub that is a gathering place, the “heart and soul of the community.”

The location allows them to network with existing businesses and to encourage new businesses to also consider Sutherlin. The ideas flow like beer from the tap with an unending supply of both, along with the enthusiasm that is the hallmark of someone with a vision to share. There is a term in the brewing process referred to as “brite,” which indicates the clarity of the beer. Looking through to the future for Backside Brewing Company, it holds that same brightness. In the words of K.C. McKillip, “One business can make a difference, give it your all to succeed. Time is of the essence.”